May 23, 2018 Reviews No Comments
Disclosure: Some links may be affiliate links. We may get paid if you buy something or take an action after clicking one of these. 2dAnimationSoftwareGuide.com is a participant in the Amazon Services LLC Associates Program, an affiliate advertising program designed to provide a means for sites to earn advertising fees by advertising and linking to Amazon.com

The latest version of Smith Micro’s flagship animation software, Moho Pro 12 (formerly Anime Studio Pro), has really moved things up a notch and is looking to position itself as a professional and affordable alternative to Toon Boom’s industry-standard Harmony software.

Moho Pro 12 is the big Daddy version of Moho Debut and includes a whole range of additional features that make it even easier to produce high-end professional quality animation (for a complete comparison chart between the Debut and Pro versions of Moho, you can take a look at the Smith Micro site here).

Now, this version actually takes the software back to its roots, as it was first launched in 1999 as Moho, then changed to Anime Studio Pro in the intervening years, and has now come full circle to reclaim the old name.

I don’t know but I assume it is to distance the software from being seen as only an anime / manga program, and instead target the broader animation market.

It could also just be that a rebranding can often re-ignite interest and stimulate new development.

Whatever the reason, the one thing that has remained consistent is that Moho is still a really solid 2d animation program. It has always been popular with both casual and professional animators, and this latest update builds on the frame-by-frame capabilities that were introduced in version 11, as well as introducing a range of other features they incorporated to gain the attention of professional animation studios and win a larger market share.

Studio use has continued to grow and Moho Pro was used to animate around 3 minutes worth of the recent production of the Oscar-nominated “Song of the Sea“, produced by Cartoon Saloon in Ireland, who also produced “The Breadwinner“, and TV series “Puffin Rock“.

If you’re new to Moho or older versions of Anime Studio, then the first thing to note is that it is primarily a vector-based 2d animation program in the style of Flash (Adobe Animate), that uses “bones” to rig up and then animate a 2d character.

Don’t know what “bones” are? Read the definition in our glossary here

Now, version 11 as well as the latest version 12 have gone a long way in changing that image by the addition of extra drawing tools and traditional frame-by-frame capabilities, but the vector-based bone system is still its real strength.

The interface in Moho 12 has been improved, and is fairly clean and well laid-out, with the main drawing area in the centre, timeline at the bottom and layers windows on the right.

If this is your first foray into a professional 2d program, then it might seem a little intimidating at first, but it is pretty standard and is fully customizable anyway, so you can set things up how you prefer, and depending on your monitor / laptop screen size or resolution.

The example scene files that Smith Micro give you when you first load the software are pretty cool as you get to see how they have been set up and animated, so it’s a great way to learn how to do it yourself.

There are also a series of quick start videos which will help to get you familiar with the program and how to use it if it’s your first time.

Here’s a screengrab I took of one of the example scenes which shows you the default layout of the interface: 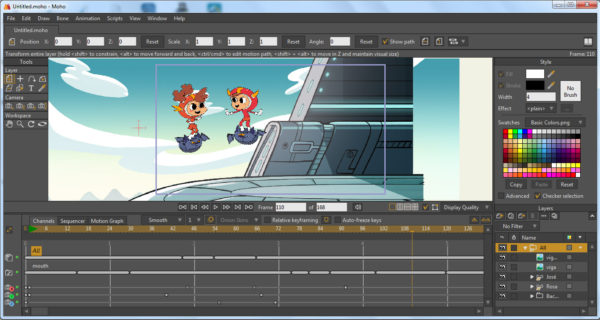 As a professional level animation software, Moho Pro is obviously packed full of features. However, if you’re currently using another 2d animation program such as Flash (now Adobe Animate CC) or Toon Boom Harmony and wondering whether you should make the switch to Moho Pro, then here are some of the notable features in version 12:

Moho Pro offers animators an intuitive interface, a visual content library and a range of powerful features that make it easy to get started. There’s also a substantial, growing and devoted base of users online that provide tips, tutorials and even content. This starts to put Moho Pro 12 in the same league as other comparable animation software packages like Toon Boom Harmony, TVPaint, and Adobe Animate, and beats them all significantly on price.

Aside from upgrading the features, with this version Smith Micro has also focused both on affordability and ease of use, two qualities that make it attractive to everyday users, students and professionals alike. Its $399.99 retail price puts it well within the reach of most artists and it is fairly easy to learn, which greatly reduces the time between purchase and output, meaning you’ll be producing professional quality animation in no time.

As a professional grade product, it may take hobby animators and casual users a little longer to get the hang of Moho Pro, particularly if it is their first foray into using an animation software, but it is well worth the effort.

While it still falls a little short in its drawing capabilities and doesn’t have the flexibility or production use of Toon Boom Harmony or TVPaint, it is an affordable alternative that caters to most styles of 2d animation.

I’m hoping that Smith Micro continue to develop the drawing tools in Moho Pro as I feel that, although much improved, this is still its weak spot.

Kids or beginners who find Moho Pro difficult to use or don’t want to invest too much money at the start can take a look at Moho / Anime Studio Debut which is kind of the “kids” or “beginner” version, and is significantly cheaper.

With many unique features, Moho Pro 12 allows you to create animated shorts, films and videos for professional release or simply to stream on the web and share with your friends.

The capability to utilize 3D modeling, motion tracking, smart bones and 64-bit architecture, along with other unique features like the Smart Warp function, lets your imagination take flight. There are almost no limits to what you can create with Moho Pro 12.